The CAPC Prevalence and Forecast Maps represent exposure to both Anaplasma phagocytophilum and Anaplasma platys. The two pathogens are transmitted by different tick vectors (Ixodes spp. and Rhipicephalus sanguineus, respectively) with different geographical ranges. However, the overlap in ranges prevents distinction between the two on the CAPC Prevalence and Forecast Maps. Prevention is mostly the same and requires limiting exposure to tick habitats, routine use of acaricides, and regular tick checks of pets.

Veterinary professionals and pet owners who want to monitor parasite activity in their county throughout the year, can also access 30-Day Parasite Forecast Maps at www.petdiseasealerts.org. These maps, developed exclusively by CAPC, provide a local forecast for every county in the continental United States on a monthly basis. 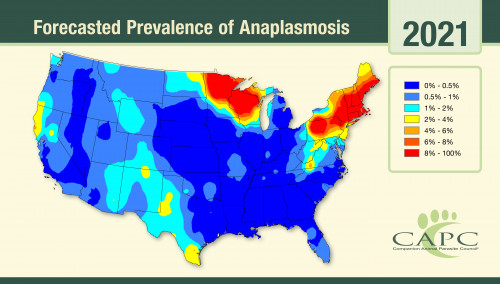 The forecasts for 2021 for Anaplasmosis are:

• Throughout much of the contiguous United States the seroprevalence of Anaplasma spp. in dogs remains the same compared to the previous nine years.
• The seroprevalence of Anaplasma spp. in dogs continues to follow the expanding range of Ixodes scapularis. When the 2021 forecasted risk of anaplasmosis is compared to historical (2012-2020) risk forecasts, there are demonstrable increases to the north and east of its traditional New England prevalence. The major areas of increased risk for dogs is expected to be the western regions of Pennsylvania and New York. Pet owners in the Northeast should consult with their veterinarian about the best way to protect their pets and remove any ticks they find on their pets promptly.  Annual testing can aid in assessing risk for dogs in hyper-endemic areas.
• Risk of Anaplasma infections also remains high in Wisconsin, Minnesota and eastern North Dakota.
• Focal areas of higher than average seroprevalence are expected in portions of Virginia, West Virginia, west and south Texas, and northern California. These areas and much of the surrounding regions have historically had a lower risk of exposure, so pet owners should be particularly vigilant in light of these predicted changes.

In dogs, anaplasmosis is a disease caused by Anaplasma phagocytophilum that infects white blood cells or Anaplasma platys that infects platelets (cells that aid in clotting).  Both bacteria are transmitted through the bite of ticks.  The black-legged tick transmits A. phagocytophilum, while the brown dog tick is believed to transmit A. platys. Similar to ehrlichiosis, dogs may not show any signs of infection. If they do, common signs include fever, lethargy, poor appetite, and muscle and joint pain. Chronic infection has not been observed.

Although infection is not transmitted directly from an infected dog to humans or other pets in the household, an infected dog does mean that ticks carrying the bacteria are present in the area that could bite and infect other pets and humans. This may be particularly important should your pet be diagnosed after some recent travel where you and your pet were recreating outdoors together.

Most cases of anaplasmosis are seen in the Northeastern and upper Midwestern states because A. phagocytophilum is carried by the same tick that transmits the bacteria that cause Lyme disease. As a result, it is possible to have both of these diseases at the same time. Recent research suggests that the range of black-legged ticks is expanding, bringing anaplasmosis and Lyme disease into new areas of the US. For both these reasons, use of year-round tick preventatives is strongly recommended, even in dogs vaccinated against Lyme disease (because ticks can carry many other pathogens not covered by the Lyme vaccine).

Within any geographic area, there may be several different kinds of ticks and each tick can have several different stages (larvae, nymphs and adults that may look quite different from each other). Also, as noted above an individual tick may also harbor more than one disease-causing agent.  People generally consider the summer to be the only time that dogs and people are at risk of getting ticks; however, some species of ticks or stages, for example brown dog ticks and adult black-legged ticks, can be active throughout the winter. In addition, brown dog ticks can live indoors, increasing risk of year-around exposure. Even though avoiding tall grass and wooded areas can help to minimize your dog’s exposure to ticks, there is still a risk of infection.  That’s why CAPC recommends year-round tick control and regular screening tests for tick-borne infections in dogs.

There is no vaccine to prevent anaplasmosis, so it is essential to use a tick control product that’s recommended by your veterinarian as being right for your dog.  Even with tick control, it’s a good idea to carefully check your dog’s entire body and remove attached ticks as soon as possible. Always use tweezers or other tick-removal devices and wear gloves to prevent exposure to disease-causing agents.