Risk of Exposure to Vector-Borne Pathogens:  What to Expect in 2021

Risk of Exposure to Vector-Borne Pathogens:  What to Expect in 2021

Every year, the CAPC provides a national forecast to emphasize the major areas of concern for pet owners for four important pathogens. These include the agents of heartworm disease, Lyme disease, anaplasmosis, and ehrlichiosis. CAPC’s 2021 forecasts indicate that the risk of exposure to these pathogens continues to increase throughout the United States, particularly in areas where the agents are common.

Ticks and mosquitoes continue to expand their prevalence ranges, even in areas that have had historically lower prevalence.  As a pet owner, the best preventive measures you can take to is to protect your pet by limiting their exposure to mosquitoes and ticks. Use of products that kill and/or repel mosquitoes and ticks, and the practice of year-round heartworm prevention are strongly recommended, along with annual testing for these diseases. Your veterinarian is the best source of information on the safest and most effective methods of prevention.

Pet owners who want to monitor parasite activity in their county throughout the year, can also access 30-Day Parasite Forecast Maps at http://www.petdiseasealerts.org These. maps, developed exclusively by CAPC, provide a local forecast for every county in the continental United States on a monthly basis.

The 2021 Annual Forecast highlights are below. 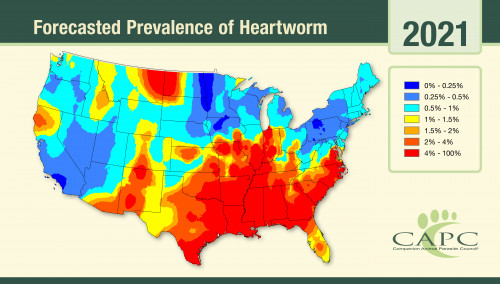 • When we compare the 2021 heartworm forecast to the average prevalence over the past nine years, we expect the prevalence to be much higher in areas along the Mississippi river, throughout the southern portions of the interior Midwest, and along the Atlantic coast north into Virginia and southern New Jersey. As the prevalence of heartworm continues to increase in the mid-Atlantic region and into the megalopolis regions of the northeast, heartworm infections are more likely to impact the health of increasing numbers of dogs in those areas.
• Pet owners in states with historically lower prevalence are again cautioned about the increasing risk of heartworm infection and are encouraged to have a discussion with their veterinarian about the changing prevalence. This is particularly important in the interior Midwest (Indiana, central and northern Illinois, and southern Iowa), and lower Michigan and Ohio in the Great Lakes region.
• Additional areas likely to experience increased risk include the southwest (southern Arizona and New Mexico) and portions of Colorado, Kansas, Montana and North Dakota in the northern and central Great Plains.
• Unique to this year’s forecast of increased risk include northern California and Idaho and western Montana in the northern Rocky Mountain west.
• Much of the upper interior Midwest and the New England region is expected to have little change, but small increases in prevalence may be seen throughout.
• An intriguing increase in risk is seen in much of central and southern Florida. These regions have had historically lower prevalence, likely due to more compliant use of preventive products. However, 2020 brought changes to pet disease prevention strategies in many parts of the US. Perhaps this and local changes in climate, testing, and veterinary visits contribute more significantly in this and other regions of emerging risk.
• Very few regions are expected to have lower than average prevalence. It is important to note that changes in local environments could create risks that might not be evident in the broader regional forecasts.

Year-round use of preventive products is the best means of providing comprehensive internal and external parasite control throughout the year.  Annual testing of pets is recommended to ensure preventive efficacy.

What is heartworm disease?

A serious and potentially fatal condition, heartworm disease has been diagnosed in all 50 states of the country. It only takes a single mosquito bite for pets to become infected with heartworm larvae.
In dogs, the larvae mature into adult worms in the heart and nearby blood vessels, often leading to heart and lung failure. Signs may include coughing, trouble breathing, and exercise intolerance, although some dogs may show no signs at all.

Cats and ferrets can get heartworm disease too. While cats are less likely to develop large numbers of adult worms, immature heartworms can damage the lungs, leading to coughing, asthma-like signs, or vomiting.  Even indoor cats are at risk — studies show that up to 30% of cats diagnosed with heartworm disease were described as strictly indoor.

Should your pet be on year-round heartworm preventive, even during the winter months?

The answer is yes. Mosquito numbers are tied closely to heat and humidity. An early spring or warm, wet fall can cause mosquitoes to emerge early or be active later in the season. Activity may be noted sporadically in the winter during periods of warm weather. Major weather events, such as hurricanes Irma, Harvey, and Maria, can also cause extensive changes in mosquito prevalence. The single most effective way to avoid timing mistakes with heartworm preventive is to keep dogs, cats, and ferrets on medication year-round and have your dog tested at least once a year. Your veterinarian can recommend an effective preventive that’s right for your pet.

Annual Testing is critical for the health of your pet 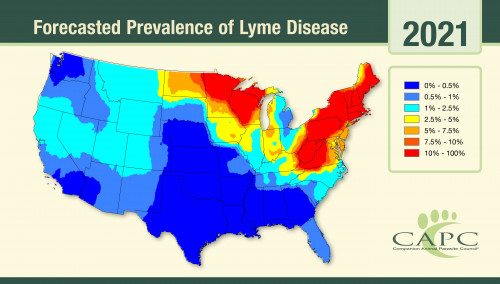 Pet owners living or traveling in areas endemic for Lyme disease, or those areas on the edges of Lyme disease endemic areas should talk to their veterinarian about testing and protecting their dogs against this disease that is a threat to both animals and their owners.

• The geographic prevalence of Lyme disease continues to expand southward and westward.
• Particularly large increases are expected in eastern Kentucky, northeastern Tennessee, western Michigan, and Ohio. High-risk “hot-spots” are predicted in parts of northwestern and southwestern lower Michigan, and southern and northeastern Ohio.
• High risks of Lyme disease persist in all portions of the Northeast, the upper mid-western states of Wisconsin, Minnesota and the upper peninsula of Michigan. A higher than normal risk of Lyme disease in North Dakota, northern South Dakota, Iowa, southern Illinois, and western Kentucky is consistent with the westward and southward expansion of Lyme Borreliosis.
• The southward movement of Borrelia burgdorferi is also evident in the increasing risk in the Carolinas and Tennessee.
• Pet owners in regions of historically high prevalence and in forecasted regions of increased risk should consider practicing aggressive tick control. Keep in mind that potential spread of Lyme Borreliosis can occur anywhere the tick vector is present. Pet owners with high risk dogs should discuss vaccinating their pets against Lyme disease with their local veterinarian. Annual testing can aid in assessing risk for dogs in hyper-endemic areas.
• Even in regions where the prevalence of Lyme and other tick-borne diseases is low to moderate, pet owners should discuss testing and prevention with their local veterinarian. Constant surveillance and more aggressive tick control will prevent an increase in prevalence of existing disease or slow the establishment of new diseases.

What is Lyme disease?

Lyme disease is a bacterial infection transmitted through the bite of an infected black-legged tick (including eastern and western black-legged ticks). Infected dogs may show signs such as shifting-leg lameness, fever, lethargy and loss of appetite, although the majority of infected dogs show no signs at all. Lyme disease can lead to systemic complications including renal disease.
People and other pets in your household can’t catch Lyme disease directly from an infected dog. However, infected dogs do indicate that there are infected ticks in the area that may transmit the infection to other household members.

Year-round tick control and vaccination can help safeguard your dog

Within any geographic area, there are likely several different species of ticks and each tick can harbor more than one disease-causing agent.  Some species of ticks can also be active during the winter. While it helps to limit your dog’s exposure to ticks by avoiding tall grass and wooded areas, this approach may not always be feasible. That’s why CAPC recommends year-round tick control and regular screening tests for dogs. Also, don’t forget that cats can get ticks and there are important tick-borne pathogens of cats (e.g., cytauxzoonosis).

Keep your pets and family safe from tick-borne disease. Talk to your veterinarian about Lyme disease prevention, including year-round use of tick preventive and vaccination.

Because parasite infections are dynamic and ever changing, CAPC recommends all dogs be tested for Lyme disease, Anaplasmosis and Ehrlichiosis on an annual basis.

The science behind the forecasts

How are the CAPC Forecast maps constructed? Numerous factors are analyzed, including the number of positive tests for the bacterial infection and the influence of weather patterns, vegetation types, and human population density. Leading parasitologists work in collaboration with a team of statisticians to identify regions of the country that may experience higher parasite numbers in the months ahead. While these forecasts predict the potential risk of a dog testing positive, they do not necessarily reflect clinical disease. The best source of information on parasitic disease is your local veterinarian: they are your local experts and the best provider of healthcare information for your pets.