Nationwide, the high prevalence areas for ehrlichiosis are less well-defined compared to other vector-borne pathogens. The maps represent multiples species of genus Ehrlichia that have differing geographical ranges. Nonetheless, prevalence is expected to be above normal for the majority of the United States with some interesting emerging risk areas.

Pet owners are advised to use the 2021CAPC forecast maps as a guidance tool for their region, and the Monthly Pet Parasite Forecast Maps as an ongoing tool for monitoring new cases reported at the local level. Importantly, Ehrlichiosis cases may vary from non-existent to endemic within a 200 miles range, leading to a strong need for local-level awareness and conversations with your veterinarian about your dog’s travel. 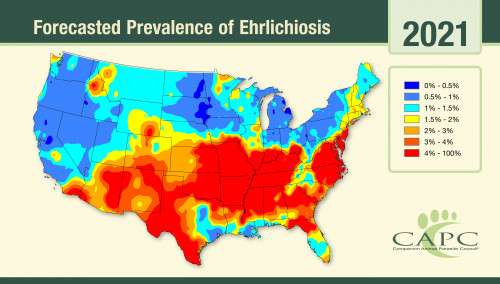 Overall, the 2021 trends in ehrlichiosis will be:

• Ehrlichia spp. seroprevalence in dogs is expected to remain high throughout the south-west, south-central, and coastal Atlantic states.
• Several areas of increased risk for 2021 are evident in the forecast map. Increasing numbers of sero-positive dogs are expected in New Mexico, Arizona and southern California. Increases are also in the forecast for northern Colorado, southern Wyoming, the northern Rocky Mountain west, central and northeastern Illinois and parts of Wisconsin and Minnesota.
• Considering the widespread prevalence of Ehrlichia spp. throughout much of the United States, continued use of tick preventives, routine examination of pets for the presence of ticks, prompt removal, and testing of symptomatic dogs remains imperative.

Infected dogs may show no signs at all, or there may be vague signs, such as fever, lethargy, loss of appetite, or nose bleeds. In some cases, chronic infection can lead to arthritis, immune cell abnormalities, and bone marrow suppression (which can be fatal). This is why early diagnosis and treatment are critical.

Humans and other pets in your household cannot catch ehrlichiosis directly from an infected dog. However, infected dogs mean there may be infected ticks in the area that could transmit the bacteria to other household members.

Within any geographic area, there may be several different kinds of ticks and each tick can potentially harbor more than one disease-causing agent.  People generally consider the summer to be the only time that dogs and people are at risk of getting ticks; however, some species of ticks, for example brown dog ticks and black-legged ticks, can be active throughout the winter. In addition, brown dog ticks can live indoors, increasing risk of year-around exposure. Even though avoiding tall grass and wooded areas can help to minimize your dog’s exposure to ticks, there is still a risk of infection.  That’s why CAPC recommends year-round tick control and regular screening tests for dogs.

There is no vaccine to prevent ehrlichiosis, so it is essential to use a tick control product that’s recommended by your veterinarian as being right for your dog.  Even with tick control, it’s a good idea to carefully check your dog’s entire body and remove attached ticks as soon as possible. Always use tweezers or other tick-removal devices and wear gloves to prevent exposure to disease-causing agents.